The Fruit of Grisaia Anime summary

The Fruit of Gisaia anime is based on visual novel game by Frontwing. The plot of the story revolves around Yuji Kazami. Yuji Kazami is a assassin and being transfered into Mihane Academy. He meets the main female heroines of the show. Suou Aname is a red hair girl who tries to get closer to Yuji. Aname have a tragic backstory revolving his younger sister Kazaki. Michiru Mastushima have thoughts of suicide and have a split personality. Mastushima have two personalities tundere and collected. She takes pills to suppress her other person. Yumiko Sasaki feels inferior due to her birth and antagonistic towards Yuji. Sasaki wanted to be loved by her parents due to her upbringing. Sachi Komane is Yuji childhood friend and dress as a maid. Komane parents die in a accident leaving her all alone.

Sachi meets Yuji and strike a friendship. Lastly, Makina Irisu who is the hier of the family. Due to her father marrying another woman. Makina was a target for kidnapping and assassination by her mother. She looks up to Yuji as a father figure. Yuji is willing to be her father but only conditions. In the series, Yuji interacts with the female characters and give them closure. For example, Yuji bodyguards Yumiko and protect her. Fake her death to deceive her father and cut her ties with family business. She resent her dad for abandoning his wife. Sasaki uses a box cutter for people whom she doesn’t like. Her attitude for Yuji change due to his kind nature. Yuji help Michiru choose life or death and falls in love with Yuji. Matsushima struggles with her emotions and two-sided personality.

Due to her friend from school commit suicide due to bullying. Komane is about to blow up a school but Yuji stops her. Sachi thinks she is selfish and have to obey people. That’s why she wears a maid outfit because she wants to please people. Yuji remember her and shows her uncle factory. The two rekindle her relationship and Sachi doesn’t want to think about herself anymore. Makina wants Yuji to be her Papa and finds about that her younger sister is the heir. She witness her death and now became a target of assassination. Yuji declines Juila Bederas (JB for shore). Now, Yuji is a fugitive and willing to protect Makina. Lastly, Aname is trying to seduce Yuji at first sight. Suou reason is to forget the past during Disaster Day with his sister Kazaki. Aname and Kazuki share a friendship during those days. 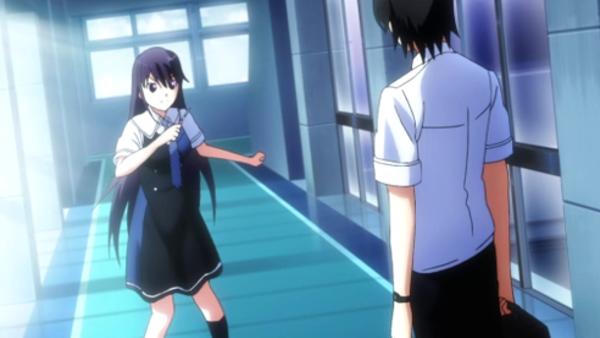 Both of them have experience their fellow teachers and students acting radical. After being the soul survivor of deadly basketball training trip. Kazaki wrote a letter about taking care of Yuji to give Aname closure. The Fruit of Grisaia anime is a redemption story and psychotherapy. Each character have a motive and tragedy backstory. Yuji is the main character that give these girls to the help went needed. The animation is done by Eight Bit with bright colors and stained character design. The Fruit of Grisala anime have some adult content due suitable for younger audience. This tv series is 12 episodes and there is a sequel called The Eden of Grisaia. Along with a animated movie The Labyrinth of Grisaia. There is another movie called Grisaia Phantom Trigger the Animation to check out as well.

I love Yuji character because he is not like the typical harem mc in anime. He is the straight guy in the anime. The Fruit of Grisaia shifts from happy to dark in a single episode. Some of the female characters come from a rich family. We never get to see if Michiru having a rich family. That’s a mystery that probably in the game. If you want to learn more about Yuji past watch the anime sequels or movie. There is some specials featuring Yuji and the female characters. I really enjoy this anime along with School Days. Yuji is like John Wick but kinder than Reeves. I would recommend watching this show and play the video game as well. You can watch The Fruit of Grisaia anime on Crunchyroll or buy Dvd on Amazon.