Green Green anime is based on the visual novel game developer by Groover. The plot revolves around Kanenone Academy, a all boys school that craze about girls. Their another school with all girls visits Kanenone Gauken for four months. The main characters is Yusuke Tasasaki who is a boy that reincarnated from the last life. Female protagonist is Midori Chitose, who is also reincarnated from a past life. After meeting for the first time in the early episodes. Yusuke doesn’t remember his past love but Midori does. Throughout the series, Midori is trying to woo Yusuke of dating her. This cause attention of Futaba, Baka Trio and Reika. Especially, Reika who is a agent of faith and a time traveler. She act antagonistic towards Midori and cause discord between her and Yusuke. 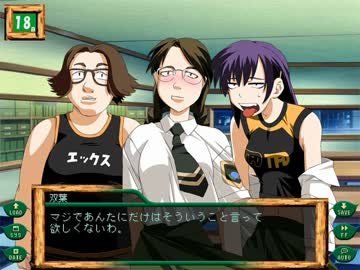 There are more crazy cast of characters in the show like Baka Trio. Which consist of Bacchi-guu, Tenjin and Ichibanboshi who act very lewd in the show. Bacchi-guu wants to date multiple girls and create a harem. Ichibanboshi love interest is Futaba Kutsuki but failed on gaining her affection. Tenjin is a loli con and his love interest is Sanae. Yusuke hangs out with these guys and make him get into worst situations. Female characters is Futaba Kutsuki who is a tundere and have a little sister named Wakaba. Wakaba is always holding her plant named Togemura. Futaba is a Onmyoji but anime doesn’t expanded that. Wakaba have powers along with Futaba. Back to other characters, there is a the school nurse Chigusa Iino. Sanae who is very sick due to air atmosphere and Tenjim target for affection.

Throughout the show, Baka trio perform perverted acts to get them a girlfriend. Their plans have been foiled by Futaba and others. Yusuke sadly associate with the Baka Trio. The girls doesn’t like the Baka Trio due to their nature. Futaba hated boys and opens up to Yusuke after rescuing her. This cause a love triangle with Midori, Yusuke and Futaba. Midori is a yandere for Yusuke and only guy she loves. The anime takes a serious turn went Midori kisses Yusuke. Yusuke retains his memory from the past. The Baka Trio and Futaba didn’t recognize him anymore. Midori have healing powers which costs her life force. In the mid series, Midori heals Sanae due to her passing out. Afterwards uses it to heal Yusuke due to a fall.

Reika Morimura uses her power to go back in time in the last episode. I think Futaba and Wakaba using their power in the show as well. In the opening of the series, they summarize the story to the viewers. You don’t have to feel loss watching this. Overall, Green Green anime is average at best. The show features a lot of humor and semi-adult content. Audience under 18 shouldn’t watch this show. Animation is flat and worked on by Studio Martix. Green Green anime have 13 episodes which you can finish within a day. We didn’t get to find out about Wakaba and Futaba powers. Maybe you will have to play the game. Don’t rely on the anime to know their stories. There is a lot of filter than story in the anime series. You can skip some episodes if you are watching for story.

Midori is a girl that some guys would want but other not. Baka Trio keeps the series going and on it’s feet. Tenjim eats rice with kid sister on it. Bacchi perform perverted acts and Ichibanboshi is trying to be a bishonen. I actually like Green Green and probably will play the game. Loving to whole boys vs girls aspect of the tv series. Two characters reincarnated with love is a out of place thing. Visual novel fans would enjoy Green Green anime. There is a Green Green OVA but it’s was not well received due to choppy and outdated animation. I would recommended watching the anime than Green Green Evolutions OVA. Green Green anime is available on Dvd on Amazon.