Capcom Beat Em up Bundle is a compilation of CPS1 games. This bundle is similar to Street Fighter 30th Anniversary Collection and featured in Hi Score Girl anime. Capcom Beat Em Up Bundle consist of seven games from 90s arcade days. Players can choose to play Japanese or English version of the game. Before I talk about the games at hand. Let’s go over the features of Capcom Beat Em Up Bundle. For example offline and online multiplayer modes. Offline is similar to Street Fighter 30th Anniversary Collection but with a twist. You can choose seven games and choose how many players and life up bonus points. Choosing arcade’s difficulty and what side player of your choice. Multiplayer modes have join and create lobbies for your friends or viewers. For my streamers out there, who play with viewers.

You can play alone until someone online joins the game. Players can set network latency for better online experience. Like online, you can choose any of the seven games or random. Online modes have the same settings as single player. While in game, you can set filters and borders to make your experience nostalgia. Even if the online is dead because I brought it late. I will talk about the problems in this game later. There is gallery mode to view concept art similar to 30th Anniversary Collection. Listen to music from the seven games in the bundle. Timeline of the release of the seven games. Option is to setup your gameplay experience to your liking. Enough talking about the feature in Capcom Beat Em Up Bundle time for games.

Capcom Beat Em Up Bundle have seven games and I will talk about each one in no particular order. Final Fight is the most popular game in Capcom. The plot is Mike Haggar daughter Jessica is kidnapped by Mad Gear Gang. Mike recruits Cody and Guy to help him get Jessica back. Final Fight is straight forward game which attack and jump. Depending on your character, you can perform attacks for example Haggar can piledrive enemies. Players can pick up weapons and use life attacks for crowd control. Characters have different attributes like Cody (average), Haggar (power) and Guy (speed). Fun fact: Final Fight characters like three protagonists and some of members of Mad Gear appeared in Street Fighter series.

There is bonus game like breaking someone car which later portrayed in Gravity Falls. Next game is Armored Warriors another Capcom beat em up with mechs. The plot of the game is Earth is being invaded by aliens from Raia. A few solders chosen by United States Government combat these unknown enemies. Players choose of the four characters such as Jeff Perkins (average), Ray Turner (melee), Glenn Reed (Power) and Sarah White (speed). Fun fact: the same mech like Blodia, Guldin, Fordy and Reptos appeared in Cyberbots Full Metal Madness. In gameplay, you can dismember enemy mechs and use their parts. The gameplay mechanics is similar to Capcom’s Alien Vs Predator game. Players fight their way to 3 acts along with a boss. There is two mech parts shooter and melee.

Along with shooter and melee for attack part, there is mobility part as well. Instead of beating up mechs with your melee weapon, there is a choice of shooting but do less damage. Bonus game is available and items to restore health. Players can fight through two planets Earth and Raia. Next game is Warriors of Fate, this game is a reminse of The Three Romance Kingdom. In the English adaptation, there names is change from the Japanese version. The plot is Cao Cao army invades and Lue Bei sends five warriors to save him. Players choose Zhang Fei, Guan Yu, Zhao Yun, Huang Zhong. Players can ride horses and fight waves of enemies. Each character have a play style like Huang Zhong uses bow and arrows. The rest of the playable characters uses swords and fists.

Warriors of Fate plays just like Knights of the Round. Speaking of Knights of the Round, players can ride horses too. The plot of the game is Arthur pulls the sacred sword from the stone. Arthur is destined to become king, but Merlin sends him along with Lancelot and Perceval to defeat Garibaldi. Players choose three playable character Arthur (average), Lancelot (speed) and Perceval (power). Fight your way through barricades and enemies. Player fight through 3 part of the level making their way through boss. Not much to talk about combat which is standard beat em up format. Getting items to gain a edge on your enemies. Another game in Medieval times is The King of Dragons. The King of Dragon is a Dungeon and Dragons like game.

This is a game featuring rpg elements like level up. Players choose up to 5 classes (dwarf, elf, fighter, wizard and cleric). Each character have unique playstles like elf uses arrow, dwarf uses shield and wizard casts magic. The plot is these warriors travel through Kingdom of Malus to defeat red dragon Gildiss. Fight your way through monsters and level up your gear. There is a item which you can use magic that defeat enemies on screen. You can switch your characters in the middle of the game. Battle Circuit is a beat em up game with bounty hunters that jobs for rewards. The plot is after going after a criminal Dr. Saturn, there is a disk called “Shiva System”. Shiva System is the key for world domination and world computer system.

A group of bounty hunters led by Harry, fight their way through Delete Gang and get the disk. Battle Circuit have a robust system and mechanics in this game. Players choose five characters with different abilities. For example Yellow Iris uses her pet fox to attack and boost speed. Cyber Blue can power up, Captain Sliver raises defense and Pinky has death blow. There is updates for characters like new moves, raise boost power and health bar. You can earn money by fighting enemies and bosses. There is team attacks as well. Lastly, is Captain Commando which takes place in the future metro city. Captain Commando and his group fight off criminals that terrorize Metro City.

CapCom is a beat em up game that’s a step ahead of Final Fight. Players choose five characters Commando, Mack the Knife, Ginzu and Baby Head. Each character have special abilities like Mack’s knife can melt enemies. Ginzu uses shurikens and many more. You can hop on mech and uses enemies weapons against them. The gameplay is similar to other beat em titles. Capcom Beat Em Up Bundle is a retro classic for arcade coin op fans. The game are emulated perfectly and converted nicely. Soundtrack is flaming and 32 bit goodness. There is some problem with the online multiplayer. Players who disconnected in-game, you control both characters at the same time. That was a bug in that Beat Em Up Bundle. I am hoping for more games of CPS1 days. 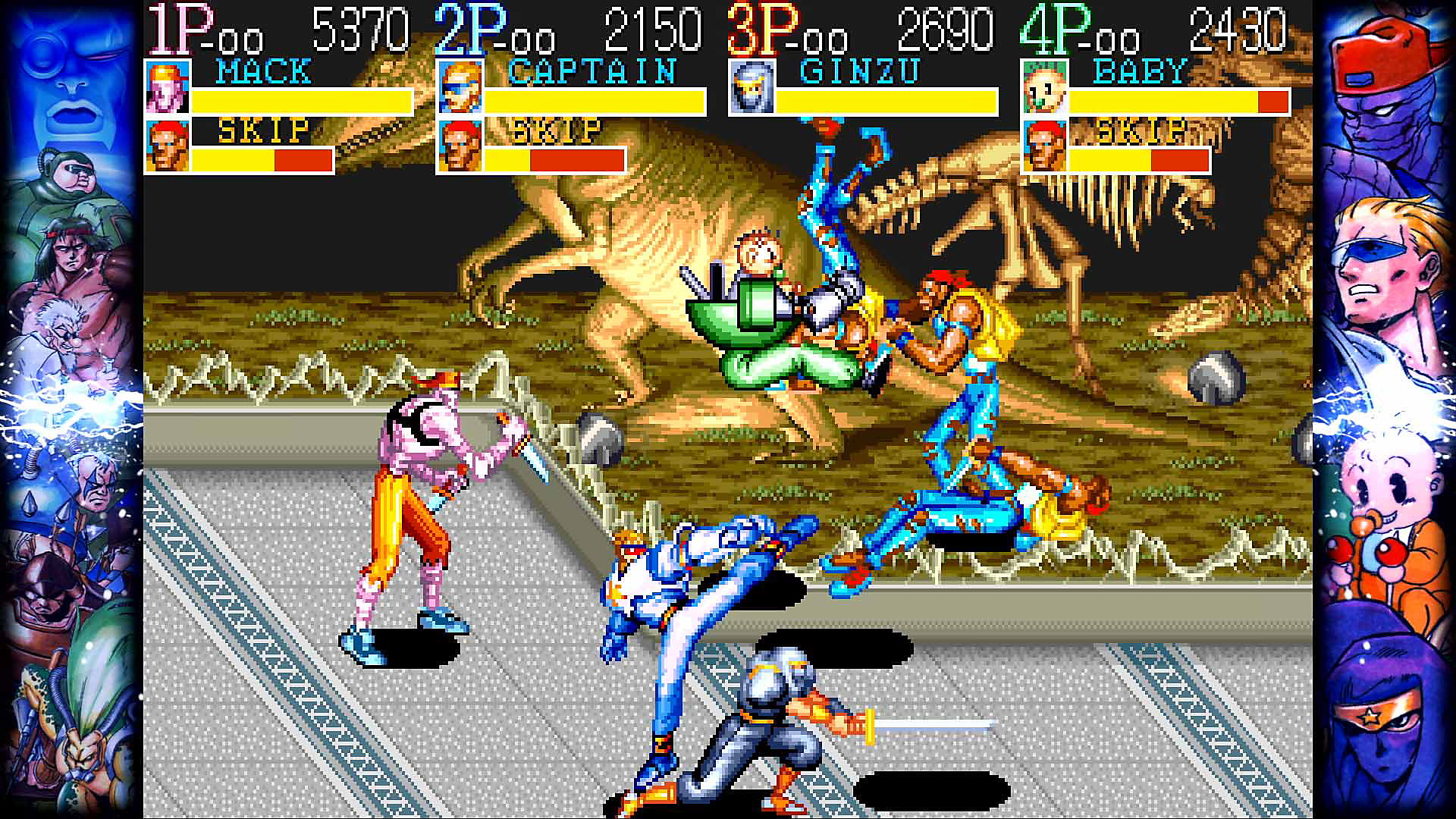 Seven is a decent number of games. There is no stretch screen like Street Fighter 30th Anniversary Collection but black borders. Overall, there is no quarter for this bundle. For those who grew up with these seven games will relive their childhood moments. There is some issues with the game but it’s been a blast to play. I want to see a Capcom Fighting Game Collection one day. Aside from network issues I would buy this game for nostalgia bomb. Capcom Beat Em Up Bundle is available now on PlayStation 4, Nintendo Switch, PC and Xbox One.