Old school fighting games are not mainstream like present ones. Esports shows off popular fighting games like Tekken 7, Street Fighter V Arcade Edition and Dragon Ball FighterZ. What about the old school fighting games? I have looked on YouTube and there are videos that have retro games. Recently, there is a Yomacon 2017 video of Breakers Revenge. I would ecstatic about representation of retro fighters. Some videos don’t include tournaments but casual matches. In causal style, there are commentators and in a venue like hotel. Note: it’s not like a tournament style like Esports. Players playing competitive or for fun. You guys know what I mean about it. Anyways, throughout the years in fighting game tournaments. Players from around the world compete to win. You probably know about Capcom Cup, Tougeki Super Battle Opera and Mikado Tournament.

Martial Masters is a colorful fighting game that inspired by Street Fighter III. Also the game is influence by Once Upon a Time in China and more. The game has 12 fighters with fluid “Shadow Attack” mechanic. Each is named after type of Martial arts like Drunk Master. Players can put off flashy combos and resets. Martial Masters should have a tournament. Players will probably have to learn the game first. The plot is about a sect called The White Lotus is talking over the government. An heir named Hongjaquan named Master Huang comes to investigate. It’s up to Huang to stop White Lotus Sect and bring peace. If you want to check out Martial Masters. You can watch a video about it.

Dragoon Might is a unique fighting game that have a hang system. The story is about fighters collecting pieces of a Dragon Medallion. Once a person get all the pieces, your wish will be granted. Dragon Ball much and it’s similar to Waku Waku 7. Each character have a weapon and special moves. For supers, there are called “Bomber Moves” went health gauge flashing. Hang system allows players to avoid attacks. Dragoon Might have combos and crossups. The game should be a contender for tournaments. There is two modes team match and single. Dragoon Might should be looked at and check out.

Project Justice is the sequel to Rival Schools United by Fate on PlayStation. This is a Sega Dreamcast game and not released anywhere else. Project Justice have a robust system. You can utilize air combos like Marvel vs Capcom. Use team-up attack and cancel party moves. Rival School have not resurface in quite a while. The plot is after first game went a new assassin group called “Reverse Society”. Reverse Society wants to take over Japan and frame Bastu. Will Batsu stop Kurow Krishima for brainwashing and ruling Japan? Rival School is such a great series. I am hoping the game have a tournament. If you want to buy Project Justice get it on Amazon.

3. Rage of the Dragons – Evoga and Noise Factoy

Rage of the Dragons is tag team fighting game. Players may notice the game is a homage to Double Dragons. For example Billy and Jimmy last names are not Lee but Lewis. Abobo appear but named Abubo Rao. Rage of the Dragons have a command prompt for combo starter. Also there is team attacks and super moves that similar to Garou Mark of the Wolves. Once, your character is defeated the match still continues. The timer rests as well and resume match. Some of the character crossover to Power Instinct Matrimelee like Jones, Lynn and Lewis brothers. ROTD is a good fighting game for resets and mixes up. I think the game deserves a shot, do you agree? 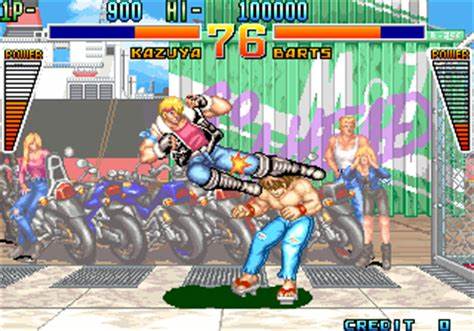 Bloody Roar series is a fast pace action 3D fighting game. I remember playing this over a friend’s house. The game allows you to fight as a human or beast. Each characters have Beast Drives (Super Moves) in the game. After Bloody Roar 3 the series went downhill. I am hoping for a reboot of the series. Just look at recent BomberMan game on Nintendo Switch. Bloody Roar have walls that collapse for a ring out. The game have good voice acting and flashy combos to execute. Note: There is a anime called Killing Bites which inspired by Bloody Roar. We don’t know the future of Bloody Roar. One day, it will be featured in tournaments.

That’s all for my top 6. There is some games I have to mention. Daemon Bride, Primal Rage and Asura Buster were good choices. What about Asuka 120% and Advanced Variable Geo 2? I have miss some fighting games in this countdown. Keep retro gaming alive and fight on. There are many great old fighting games out there. We might see some on YouTube someday. Some Esports organization showcase old school games like United Gaming League. More organization might pick it up soon. I want to see that in the future.

3   1       What is Slice Dice and Rice? Welcome to another hands-on with indie games. Today I will be talking about…