Jojo’s Bizarre Adventures have video game adaptation as well. I might do a retrospective on Jojo games in the future. If you don’t want to read to manga. Watch Jojo’s Bizarre Adventures anime, go to Crunchyroll website. Enough about Jojo, let’s talk about video games characters that inspired by anime. In the 90s, fighting game fans may spot traits and personalities based on anime. Based on their features and movesets. What about overall design that strike a similar of the series? You can see the references of a certain anime character. I will be counting down top 5 video game characters that inspired by Jojo’s Bizarre Adventure. You might know some games in the countdown that strike your interest. Here we go with the countdown.

Neo Dio is the final boss of World Heroes 2. He got a lot of Jojo’s Bizarre Adventure traits. Dio name came from Dio Brando (villain from Jojo). His design is based on Baoh and Kars (Battle Tendency). Neo Dio moves are based on Kars as well. I am guessing the creator is a big Jojo fan. Neo Dio is not one alien you should mess with. If you want get your hands on World Heroes series. World Heroes 2 is available on Nintendo Switch, Xbox One and PlayStation 4. Dio is waiting for you to challenge him. 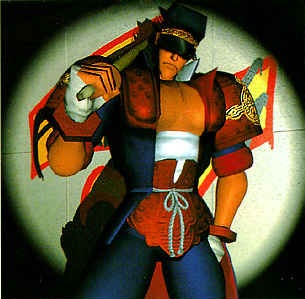 Bahn is the main character of Fighting Viper. He is inspired by Jotaro Kujo from Stardust Crusaders. Bahn is a 17 year old high school from Nishino Machi. His character model is similar to Jotaro with his long coat. Imposing look and his signature hat, Bahn motive is finding his father and fight him. Bahn calls himself “Gengis Bahn III” and similar to Akira Yuki (Virtua Fighter). If you want to play Fighting Vipers. It’s available for Xbox 360, PlayStation and Sega Saturn. You might download a emulator and rom of Fighting Viper.

3. Benimaru Nikaido (The King of Fighters)

Benimaru Nikaido have one trait of a Jojo character. That’s Jean Pierre Polnareff with his hair style. Benimaru have agility and speed like Sliver Chariot. Jean doesn’t use lighting like Benny does. Benimaru fights alongside of Kyo Kusanagi and Goro Daimon for Team Japan. He comes off a ladies man and a model. If it’s a tournament, Benimaru gladly join Kyo and Goro to win. There is not a lot of traits of Jojo in Benny. Benimaru is a good character to use in KOF. If you want to play The King of Fighters series. There are plenty out there. King of Fighters 2002 Unlimited Match have a larger roster than previous ones. That game is available on Steam, Xbox Live and PlayStation 2. Rose is a fortune teller with Soul Power. She travels the world to defeat M.Bison and his Psycho Power. Her design is similar to Lisa Lisa (Battle Tendency). Rose uses his scarf to deflect projectiles. She also uses it while fighting as well. Rose has an apprentice named Menat, who appears in Street Fighter V. Lisa Lisa and Rose have similar traits. Rose uses Soul Power and Lisa Lisa have Hamon. Will Rose destroy Bison for good? If you want to play as Rose. Buy Street Fighter 30th Anniversary Collection on Nintendo Switch, PlayStation 4, Xbox One and Steam.

Dandy J is a treasure hunter that hunt for Waku Waku Balls. He is based off Indiana Jones and Joseph Joestar (Stardust Crusader). Dandy fights with a wimp like Castlevania. He travels with his friend’s daughter Natsumi Hazama and pet cat Rampoo. Waku Waku 7 is a parody of anime troupes and cliché. Dandy J probably have traits of Joseph Joestar in the game. Maybe his personality and special moves that Dandy uses. Old Joseph uses Hermit Purple which his stand is like tree vines. J have a wimp which is not like Hermit Purple. If you want play a wacky anime game like Waku Waku 7. The game is available for Nintendo Switch, Xbox One and PlayStation 4.

That’s pretty much the countdown. There are more video game characters that inspired by anime like Jojo. I am pretty sure you will spot some out there. Jojo’s Bizarre Adventure is a great series to watch and read. I would recommended to someone who wants to start on it. Anime inspires character design, moveset and personalities. Gotta love Otaku culture in the video game industry. Hopefully in the near future we might see more Jojo inspired characters.

Top 5 Brawlhalla Cartoon Crossovers Should Be In the Game

1        Brawlhalla Cartoon Crossovers Brawlhalla just brought in Finn and Jake from Adventure Time also Princess Bubblegum. For those who…

Top 5 Vampire Video Games That Will Suck Your Blood

2   1         Vampire Video Games wants blood Vampire video games is not well-known and a sub-genre in supernatural. These beings…