Neo Geo 25th Anniversary Collection Edition is a bundle with classic SNK Games. I brought this at Humble Bundle using Amazon Pay. Humble Bundle is a website, that you can purchase games within a collection. Sometimes, there is single games but they’ve deals on bundles. Customers can buy a whole collection from Sega, Capcom and other brands. Check out their website for more, I am a Humble Bundle Partner too. That being said, Neo Geo is a console name as well. There is a handheld called Neo Geo Pocket just like Game Boy. Neo Geo is known for The King of Fighters, Art of Fighting, Fatal Fury and many more. Once, you play these game in an arcade. Gamers will recognized the Neo Geo jingle in start of the game. Neo Geo games teaches players how to play.

Which is a learning curve for beginners. Arcade games doesn’t give you a tutorial like Neo Geo games. Some may have a tutorial in their games but most don’t. Neo Geo 25th Anniversary Bundle have several games I will be reviewing. Also there is cons in Neo Geo 25th Anniversary I will get to later. Let’s started on the popular IPs such as The King of Fighters. There is two KOF games in the Neo Geo bundle. The King of Fighters 2000 introduce the “Striker System”. Striker System is a assist character that help you in battle. This system is similar to Marvel Vs Capcom Clash of Super Heroes. Strike System is unnecessary to KOF and wrongly implemented. Overall, The King of Fighters 2000 retains it’s core mechanics like previous installments.

The plot doesn’t follow Kyo and Team Japan but new protagonists. Note: 2000 introduce popular character like K’ and Kula Diamond. K’ and his team seeks to stop NESTS cartel with the help of Heidern. Note: SNK was about to be Bankruptcy and were issues with the game. The King of Fighters 2000 was average but want to bring something new. King of Fighters 2002 was a step ahead of 2000. The King of Fighters 2002 got rid of 4 on 4 members and went back to 3. 2002 retains the same system is past games. There is some revamps of the Power Gauge and no storyline. The King of Fighters 2002 Unlimited Match is a updated game with 66 characters. If you want to check that game out and buy it. I would say Kof 2002 is better in my opinion because I disliked the Striker System in 2000.

Next up, Art of Fighting 2 is a sequel first game. Last game, you ether play as Ryo Sakazaki or Robert Garcia. AOF 2 allow you to have play as multiple characters. The first game reminds me of Fatal Fury with only three playable characters (Andy, Joe and Terry). Gameplay mechanics is still the same from last game. My rant about this game is charging up stamina. If you run out of stamina, your attack will not be effective. Overall, Art of Fighting 2 is a improvement of the last. The Last Blade is a fighting that takes place Bakumastu era. Last Blade focus on Four Sacred Beast (Seiryu, Byakko, Suzaku and Genbu). The gameplay allows players choose two style speed and power. Speed is for combos and power based on damage,

The Last Blade is nowhere like Samurai Shodown but have its own identity. The Last Blade is a very chill and breath of fresh air for fighters. Soundtrack is lacking but very solid fighter in my opinion. There is a sequel to this game with more playable characters. There is two Samurai Shodown games in Neo Geo 20th. Samurai Shodown II is a sequel to the 1st game. There is more characters and super moves. Once your POW meter is fill, a command prompt shows above like quarter-circle CD. That allows you to execute that move. Amakasa is defeat in the last game but have a new adversary named Mizuki Rashojin. Samurai Shodown II is a very slow-paced Japanese Orientation game. You will slice your enemies in half like piece of ham.

Samurai Shodown V is a revamped from III. There are more characters and unbalanced issues. V is not very good and had problem with. I hated the stamina and reminds me of Art of Fighting. The balancing is a rigged because my playthough of the game. The computer would take quarter of my heath. While I take less damage which I didn’t like. Gameplay is still the same as before. I would say this is my least favorite. King of Monster is a fighter that reminds of Godzilla Destroy All Monsters Melee. Players select 6 characters and 12 levels. The concept of King of the Monsters is similar to Wrestling. You can pin, grab and use special moves. King of the Monster is abit dry and could been better. There were two Fatal Fury games in Neo Geo Collection.

Fatal Fury Special is a updated version with same gameplay mechanics. Ryo Sakazaki appears in this game fun fact. The only thing I don’t like about Fatal Fury is switching from plane to plane. I am guessing it distinguish itself from Street Fighter. This gameplay mechanic is annoying and jarring. Real Bout Fatal Fury 2 The Newcomers is the sequel to first game. There are two new characters Li Xiangfiel and Rick Strowd. Real Bout retain two-line system like previous Fatal Fury and have super moves. I like Real Bout Fatal Fury 2 better than special. You can create combos and much faster gameplay. I forgot one last Fatal Fury game called Garou Mark of the Wolves. Garou Mark of the Wolves is much cleaner than Real Bout. MOTW has fresh mechanic is as T.O.P.

T.O.P system allow player to use super moves based on their life bar. Just Defense grants players small health after successfully blocking a attack. After fighting, the game rewards you’re a rank. Players must get AAA rank to face a Kain R Heinlein. If not Grant will be the final boss and no ending. Garou is another great Fatal Fury game that up there with Real Bout. Metal Slug have three games to choose from in Neo Geo 25th Anniversary. First Metal Slug, which is run n gun game that reminds me of Contra. Basely, you rescue refugees and that will give you powerups. Players can main vehicles and use melee attacks on enemies. Metal Slug 2 and 3 plays the same but new weapons. Character transformations and new playable solders.

Sengoku 3 is a beat’em up that features special moves that doesn’t eat up your health. The game is abit slow and allows player use projectiles. Players chooses levels based on difficulty and playable characters with attributes. This one is my least favorite out of the collection. There is be one attack button instead of two. Baseball Stars 2 is very fun and enjoyable sports game. The game plays like any other Baseball games with powerups. Players can pick a team and try to win a game. Neo Turf Masters is a golf game that’s very lax. All you have to do is try to get a hole in one or birdie. I am not a huge golf fan but it’s very pleasant. Shock Troopers reminds me of little of Metal Slug. The game is top-down perspective, which players can go alone or together.

Shock Troopers uses eight-way stick and allows players to switch members (Team Battle). You play as a team of mercenaries to stop a terrorist group from talking over the world. Shock Troopers is very challenging and explosive. Last three games I will talk about are Ironclad, Pulstar and Blazing Star. Blazing Star is my favorite due to it’s flashy gameplay but annoying announcer saying “Bonus”. The game is mocking your performance as well. Blazing Star have crispy 2D graphic and ability to charge shots. Ironclad has pre-rendered graphic and has a top-down perspective. The game has a little helper that protects you and support. Ironclad and Blazing Star are hands down enjoyable. 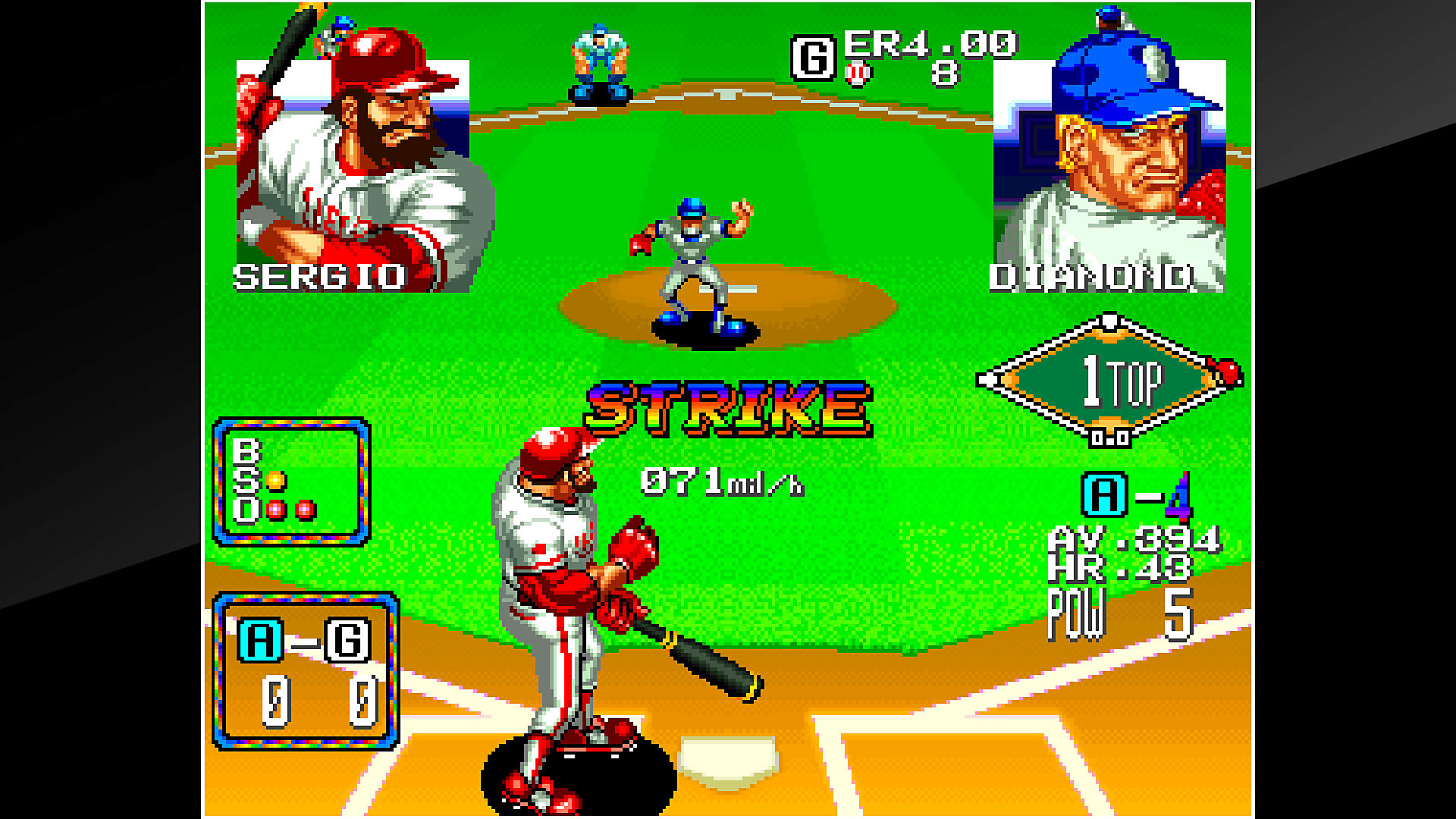 Pulstar is a little slower and my least favorite. The gameplay little similar to Blazing Star. There is not much to say about it. I hated charging my shot which can get repetitive. Neo Geo 25th Anniversary Collection is a galore of retro ness. There is some problem such as lack of online (except Metal Slug series). No button configurations to map your controls. I hate you have to download each game separately instead of one software. Those are the cons but pros is there a lot games to choose from. If you’re a Neo Geo fanatic. Go to Humble Bundle and download Neo Geo 25th Anniversary Collection Edition now.

Huniepop – How to Get a Girlfriend Video Game Review