All female fighting games have predominated no males in them. Some fighting games have a lot of males and less females. People might argue that female have fanservice or ecchi content. I don’t know that’s the case in most fighting games. All girl fighting games have the same traits as traditional fighters. We have your grappler, Shotokan and speedy characters. The final boss have to be a female antagonist. That’s goes for main heroine of the games. She wants to find a tournament or rule the world. Some female character outfits are scantily-clad or different archtypes. You have the tomboy character or a woman who is seductive. In this countdown, I will talking about top 5 all female fighting games. We need aliitle girl power don’t you agree. I been playing them and wanted to talk about them. Here we go with the countdown.

Variable Geo is a fighter developed by Giga and TGL. The plot is a fighting tournament that determines the strongest women. Whoever wins the tournament ten billion yen and real-estate for restaurants. For those who lose a bout, will have to strip or perform sexual acts in front of people. VG games have these erotic scenes expect for Advanced V.G 2. Variable Geo have cast of characters such as Ryu-clone Yuka. Man-women wrestler Jun, a happy go-luck loli Manami and American girl named Erina. Variable Geo spawn a OVA and spin-off V.G Neo. V.G. is a average game from the 90s. If you love uncensored fighting games featuring cute ladies. I would check this one out and Variable Geo Custom is available for download.

Asuka 120% Burning Fest is a Japanese bishojo fighting game developed by Fill-in-Cafe and FamilySoft. The plot of the game is set in Ryoran Private School for Women. Ryoran hosted a martial arts tournament called Rivalry Budget Contest Mega Fight. Different representative from school clubs can compete. The main character Asuka Honda is in the chemistry club. There are other characters from different clubs like Tennis, Volley, Karate and more. Each character have moves based on their club archtypes. Asuka 120% was a flashy game with combos and graded cast. It spawn sequels like Asuka 120% Excellent, Maxima, Final and Return. The game looks fun and I think you can find a PC version on the net.

Vanguard Princess was a indie fighting game developed by ex-Capcom employee named Tomoaki Sugeno (Suge9). The fighting engine was used by Fighter Maker 2nd, which a program to create animation and more. Vanguard Princess story is about a mysterious woman with supernatural powers. That woman is named Hilda and is captured by the government. Her power was accidentally unleased and bestowing various young girls with powers. The game is beautiful HD character designs and effects. I have not seen a game like this. You choose a character and assist one. Vanguard is just straight up anime with girl on mecha. Gun-towing and female with a large sword slicing and dicing. If you want a clean HD anime fighting with visuals. Vanguard Princess is available on Steam with Director’s Cut add-on.

Nitroplus Blasterz Heroines Infinite Duel is a crossover all-girls fighting game featuring Nitroplus characters. There is another version called Nitro+ Royale Heroines Duel which is a doujin. Nitroplus is a visual novel company that collaborated with Type Moon. There are well-known properties like Fate-Zero, Super Sonico, Psycho Pass and Schoo-Live. The plot of the game is different Nitroplus universe and interacting with one other. Nitroplus Blasterz have guest characters like Aino Heart (Arcana Heart) and Homura (Senran Kagura). The game is a little similar to Vanguard Princess, which you choose assist characters. Gameplay is watered down but each characters feels right. I owned this game and had fun with it. For Nitroplus fans I would recommended getting this game. Nitroplus Blasterz Heroines Infinite Duel is available now on Steam and PlayStation 4. 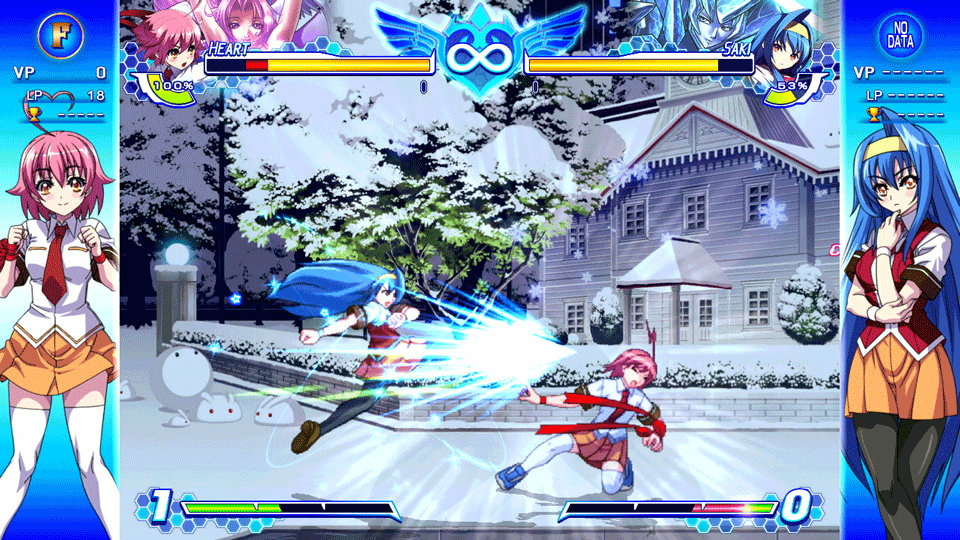 Arcana Heart is a fighting game developed by Examu. The game is about girls fighting with being known as Arcanas. The first game as released in US but not the sequel. Arcana Heart 2 was badly ported to PS2. Afterwards, Suggoi! Arcana Heart had new characters and still had poor performance. Arcana Heart 3 was an improvement than its predecessors. There are still anime archtypes like Shrine Madien (Maori), Demon Nun (Clarice) and Goth loli with puppetry (Lieselotte).

The gameplay was unique like homing and switch backgrounds with Arcanas. Note: Heart Aino was featured in Blazblue Cross Tag Battle and Nitroplus Blasterz. The story of Arcana Heart starts off Mildred Avallone was to merge human/elemental world for more power. Key characters like Saki, Fiona, Kamui and Heart are apart of the story. If you are looking something unique play Arcana Heart. Arcana Heart 3 Love Max Six Stars is available now on Steam.

That’s all for the countdown. There is some mentions like SNKHeroines: Tag Team Frenzy, Koihime Muso, Skullgirls and Touhou Project. There might be more in the future. Guys you know what happens in a cart-fight. There may be some bad –all girls fighting games out there. Overall, I love me some female kicking butt and talking names.

Nitnendo Amiibos are your Friends to Play with and Unlock Content

Do You Have a Video Gaming Disorder and Addiction?

2   1       What is video gaming disorder? Video gaming could be anybody favorite pastime but do you play it too much….

How Long Do You Stream on Twitch? Does it Get Tiresome?

1   1       Streaming on Twitch Have you ever played limbo and the term how low can you go? Well in Twitch…