In 30th Anniversary Collection, there are four modes in startup menu. Online, Offline, Options and Museum to choose from. Offline is playing arcade mode locally with a friend or solo. During in-game you can view moveset of the characters. Change filters and borders for an arcade -ish look. Battle a friend with versus mode and set handicap to your liking. Online mode is competing with players around the world. Players can host lobbies, set latency input and set four Street fighter games. Option is setting your controls and etc. Museum is a history of Street Fighter and development. Player could listen to different soundtracks of 12 Street Fighter games. There is a lot of artwork and designs of Street Fighter to check out.

What games in Collection?

Street Fighter 30th Anniversary Collection has a various selection of games. First is 1987 Street Fighter series, Ryu is the only character player chooses. Ryu battles over 9 fighters to become champion. There are mini-games such as breaking boards and stone. The special moves such as Shoryuken and Hadoken is not very responsive as future games. There is two player mode but 2-player will be Ken. Players can finish the game in 30 minutes or less. Street Fighter II have 4 updated versions of the game. The World Warrior is the original game I have played. Eight fighters are available in World Warriors. Ryu, hero from the last game, Ken, Guile, Chun-li and Zangief.

Players fight contenders all over the world until you face Shadowloo. After defeating Vega, Balrog and Sagat, final boss is M.Bison then get a ending. Street Fighter II: Champion Edition changes is four Shadowloo members playable and refined characters. Graphic from background stages has been redrawn and new audio. Street Fighter II Turbo: Hyper Fighting is manly about speed. Players execute combos and quicker responds for special moves. Super Street Fighter II features four new characters Dee Jay, Fei Long, Cammy and T Hawk. There are in-game balances and super moves are available in Turbo. Tournament mode is eight players facing off against each other.

Street Fighter Alpha series is a stepping stone after Super Street Fighter II Turbo. Alpha have new mechanics such as Alpha Counter and Super Combos. Depending the button command of the super, players get executed it on Level 1-3. After selecting a character, player can pick “auto” or “normal” controls. There is air blocking and chain combos for offense to defense. Ten additional character is total in Street Fighter Alpha. Ryu, Ken, Sagat and Chun-li makes a return along with M.Bison. Newcomers make a appearance in Street Fighter Alpha such as Charile, Rose and Dan. Fun Fact Final Fight Guy and Sodom appear in this game. 1987 Street Fighter characters Birdie and Adon return as well. New game mode called “Dramatic Battle”, which is a two-on-one battle. Alpha 2 retains mechanics from first game. Custom Combos were introduce to create your own moves. 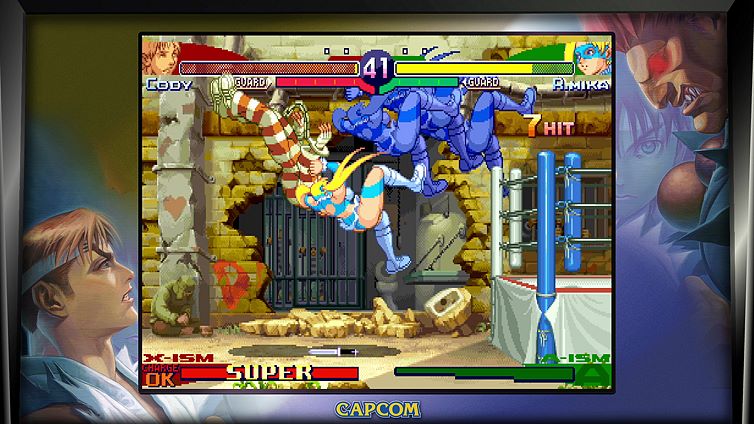 Street Fighter II doesn’t play like Alpha and II. New Generation have new mechanics such as parry, super art and EX moves. Some of the old cast of Street Fighter doesn’t appear in 3. Ryu, Ken and Chun-Li are the only recurring characters. New ones are introduce such as Alex (new protagonist), Dudley, Ibuki and Sean. M. Bison is not the game’s final boss but Gill, who wants to become god. There is a different take on super moves, once in character select you have to choose one. The gameplay and graphics are very flashy with sparkly effects. Street Fighter III: 2nd Impact have new features such as mini-games, tech throws and personal action. New character arrive such as Hugo and Urien. 3rd Strike is similar to 2nd Impact and New Generation. Mini-games makes a return and a Judgement system, which rank your performance.

What are your thoughts?

Aside from five new characters like Q, Remy, Makoto and Twelve. Street Fighter 3rd strike is the most popular in the series. 30th Anniversary Collection is most fun I ever has in Street fighter. I had some problem with Steam version. There is no option for audio and lag in online matches. Another problem is only four Street Fighter games are online not all. I am hoping to get a update patch for this game. Overall, I really enjoy it and hopefully Street Fighter will live on. If you are a retro gaming fighting fan, Street Fighter 30th Anniversary Collection is available on Steam, Xbox One, PlayStation 4 and Nintendo Switch.