What is Nier: Automata?

Nier Automata is the sequel to 2010 Nier video game. The game is a spin-off part of Drakengard series. The story is about an organization called YoRHa, fighting the threat against machine. An emotionless female android called 2B sent to investigate. 2B is not alone in this mission. She seeks help of a male android 9S. Together 9S and 2B finds the truth on what happening to machines. Automata is developed by Platinum Games known for Bayonetta, Metal Gear Rising and Mad World. Platinum Games manage to collab with Square Enix for this title. During development of Nier Automata, Yoko Taro and Yosuke Saito wanted to make a sequel. Assistant producer Yuki Yokoyama was unwilling to make a new game, due to low sales. Luckily, after positive feedback from original Neir game.

Square Enix were willing to continue Nier IP series. They wanted to create a better, more action-oriented gameplay experience. Square contact Platinum Games and agreed to collaborate with Square Enix. There are two conditions Yoko Taro became director and be present with the production. Taro is a little uneasy about collaborating and staff at Platinum Games were happy. Designer Takahisa Taura wished to create a sequel as well. The original plan was to make the game mobile platform and PlayStation Vita. Yoko stated that they’ve intended to be similar to farming simulator. Later on decided to develop the game for PlayStation 4 instead. The development team took feedback from fans for graphics to gameplay.

What is the gameplay?

Nier Automata is a blend of hack n slash and action RPG, Players control 2B, she is accompany by Pod who provides projectiles 2B utilize various weapons, sword, lance and more. For defense, 2B can side-step and counterattack enemies. Offense, 2B could lock on to enemies and execute finishing moves. During the course of the game, the camera transition turn from top-down into side-scrolling. That’s the most unique perspective in any game. 2B could pilot mech to fight giant bosses. Upgrade your weapons and gear. Level up and but consumables to use in battle. 2B could take on side-quests, which is inspired by The Witcher 3: Wild Hunt. Nier Automata uses other video game genre elements like bullet hell. Automata doesn’t have just one ending but multiple. Depending on the gamer’s playthough, the story will change. The game attends to break the fourth wall in some point. 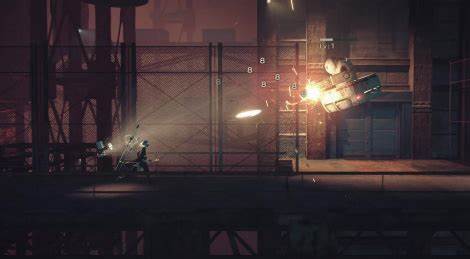 What are my thoughts?

Players can’t save during mission but how to reach a certain point. The graphic looks very gothic and gloomy for its tone. Premise kind of reminds me of Terminator alittle bit. People get to see how 2B deals with her emotions and humanity. The question is does machine have a right to live? What is their purpose for being created? Why do I feel nothing for human life? A lot of people praise this game to be one of the best games in 2017.

There are already people cosplaying and fandom for Nier Automata. My thoughts on Automata is I enjoy it a lot and dark atmosphere. Square Enix and Platinum Games did a great job and wanna play more. I like the interaction with 2B and 9S more like siblings. Boss fight takes things to a whole new level. If you want a great game about humanity and machines. Buy Neir Automata for Steam, Xbox One and PlayStation 4 on Amazon.