What is Valkyrie Drive Mermaid?

Valkyrie Drive Mermaid is based on Marvelous Valkyrie Drive: Bhikkhuni action hack n slash video game. Valkyrie Drive is similar to Senran Kagura (also made by Marvelous) but different concept. The plot is girls has been effect by Armed Virus and divided by two classes Liberators and Extars. Liberators are welders and Extars are weapons form by sexual intercourse. The whole scenario on people turning into weapons reminds me of Soul Eater but different. I was not new to that troupe in anime but there are others got it. The plot of the Valkyrie Drive: Mermaid is Mamori Tokonome, an Extar who was recently transported in Mermaid Island. Mamori come off an innocent 16 year old who wants to get off Mermaid Island. She has endure bullying due to her last name Tokonome (means virgin in Japanese) and during school.

Who are the main characters?

The reason Mamori is on Mermaid Island is because she is been effect with Armed Virus. Tokonome is not the only one on the Island. Mirei Shikishima is a Liberator of Mamori and 15 year old solder from an Organization. Mirei is portrayed as emotionless and courageous to protect someone. She and Mamori journeys to Mermaid Island to help other inhabitants. The Island is ruler by the Governor Akira Hiragi, who is portray as a man but later turns out to be female. Charlotte Scharsen is one of the main antagonist of the series and a member Walter. Akira wants girls who are affected with the armed virus to live in peace. Charlotte display cruel method which displeased her Commandeur Kasumi Shigure and others.

First half of the series, Mirei and Mamori undergo trials of Charlotte’s reign. Later, come off friendly Liberators and Extars who live peacefully on Mermaid Island. Meifeng Sakura who steals values from Welter to the girls in Torino. Torino Kazami is taken in girls who are affected by Armed Virus and runs Atelier Torino. Rain Hasumi and Lady J are allies of the main protagonist. Secondary antagonist is Momoka Sagara, a girl in Mirei past and former partner in the war. Before being transported to Mermaid Island, Mirei and Momoka fought together in a war. Mirei was unable to fight and left Momoka. Momoka harvests hatred towards Mirei for leaving her and wants revenge.

What I think of the series?

Arm Corporation (Hyakka Ryouran, Elfen Lied and Queen’s Blade) is a part of developing in Valkyrie Drive: Mermaid. Valkyrie Drive: Mermaid has LGBT elements and ecchi troupes through the series. The character designs are done by Hiraku Kaneko who known for The Qwaser of Stigmata and others. Some of the characters are out of proportion such as Torino Kazami and Lady J. These two characters are way too curve looking and also their assets. I don’t have a problem with it but I find it funny. There is some filter episodes but I just want to go to the main story. The series is very short and could be finish within a day. 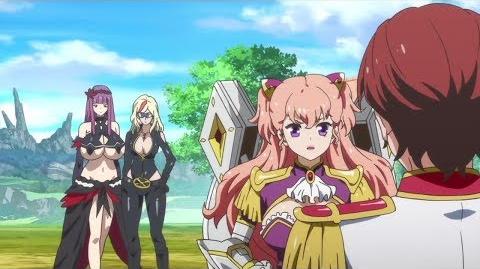