What is the plot of Overlord?

Overlord anime is based on a light novel by Kugane Maruyama and so-bin. It’s a 13-episode animated tv series by Madhouse. The plot of Overlord, sets in the year 2126. A DMMORPG called Yggdrasil and on the verge of shutting down. In the game, there is a guild called The Great Tomb of Nazarick. This game have 41 members which are Floor and Area guardians also Pleiades. There is the guild leader named Aniz, who is an avatar of a salesman that remains in the game. . Ainz journeys through Yggdrasil to solve problems and exploring different regions. Ainz motives are unknown as a guild member. 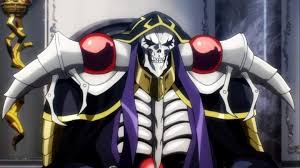 His relationship with guild members are caring and wise. The floor member consist of Albedo, who falls in love with Ainz. Shalltear Bloodfallen is a vampire girl who also love Ainz and betrays him in the first season. Demiurge, who is the most evil NPC in Nazarick. Cocytus is the guardian of the fifth floor and charge of security. Two twin floor guardians Aura Bella Fiora and Mare Bello Fiore. Many more Ainz Ooal Gown members throughout the series. Ainz not only a guild master but adventure named Mononga. In the show, Ainz balance being a guild master and adventurer. Nazarick group is not the only characters to have story arcs.

There are multiple characters in Overlord with story arcs. Lizardmen are made into 5 tribes Green Claw, Small Fang, Razor, Dragon Tusk and Red Eye. In season 2, we are introduce to Zaryusu Shasha, he is apart of Green Claw tribe. Zaryusu has an older brother named Shasryu Shasha and love interest Cursch Lulu. The Lizardmen story arc is about Ainz sending a message about dooming their village. Zaryusu is trying to gather all the tribes to face Ainz. Little to know, each tribe went to war with one other. Forging an alliance with different tribes was not going to be easy task. After reaching an agreement, all five lizardmen tribe members are in unity to face Ainz. Sebas Tain is one is the leader of combat maids. He is a Pleiades and very power butler of Nazarick. In earlier episodes in the season 2, Sebas pickups a young girl named Tuareninya Veyron.

What I think of Overlord

She was badly mistreated and Sebas took her in. Tuareninya falls in love with Sebas Tian despite his age. He meets up with other character like Brain Unglaus. Climb is a bodyguard of Princess Renner, who joins up with Brain and Sebas Tian. Princess Renner come off as a two-faced person. She love climb but planning on using him for personal gain. Renner allies herself with Blue Rose, an all-female adventurer group. There are other groups like Eight Fingers and Six Arms. In my opinion, Overlord season 2 is better than 1 because the series don’t focus on one character. I am happy they took that direction and explain their backstory. Season 3 is in July 2018 and can’t wait for what will happen. Overlord is available now on DvD on Amazon.